The release of the movie has got wide press and media coverage. A selection of them: 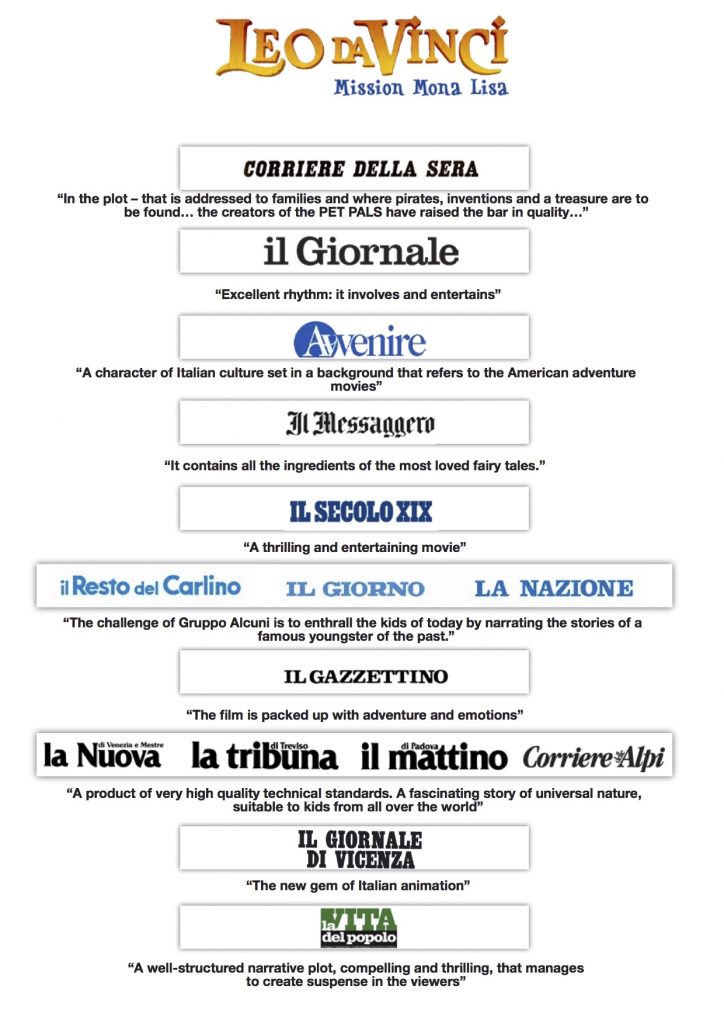 Movieplayer.it:  “The protagonist of Leo Da Vinci – Mission Mona Lisa is a character with whom kids are brought to empathize immediately. The operation of Manfio is perfectly successful, because it introduces Leonardo da Vinci with the right style – combining tradition and modernity – to the younger audiences.”

Ecodelcinema.com: “The most surprising aspect is definitely the execution of sceneries and backgrounds, that display a magnificent use of colors, with bright and vivid tones. The set designer Marco Pegoraro shows an extraordinary artistic talent both in the realization of natural environments and in the urban design.”

MovieforKids.it: “Gruppo ALCUNI has “cleaned up” Leonardo from the dust of time by transforming him into a modern character, humorous, cheerful and, above all, young. Therefore, a hero that can be held as a model by kids to spur their imagination and creativity.”

Cinematik.it: “The technical realization of “Leo da Vinci – Mission Mona Lisa” is undoubtedly of great value. Remarkable is the visual impact of the whole work, that it is not inferior to the famous productions from USA.”

Sentieriselvaggi.it: “The credit goes undoubtedly to the precision of the animation;  the accurate and realistic colours of environments, especially the aquatic one;  the soundtrack (composed by Marco Fedalto), that is always dynamic and perfectly adapted to characters and situations and – last but not least – the excellent picture of a fifteenth-century Florence.”

Zerkalospettacolo.com: “Forget all you know about the life of Leonardo da Vinci.  Leo da Vinci – Mission Mona Lisa, produced by  Gruppo Alcuni and directed by  Sergio Manfio is a colorful and lively adventure, that unfolds between pirates, sharks, inventions, mysteries and treasures to discover. It is a joyful hymn to the realization of one’s own dreams, as well as to friendship, solidarity and love.”